The American black bear (Ursus americanus) is a medium-sized North American mammal with black fur. Notwithstanding the name, some subspecies can be brownish or even blond in coloration. It has a large head, powerful jaws, short claws, and round ears. The claws are short and rounded, being thick at the base and tapering to a point. The ears are small and rounded and are set well back on the head. The skulls of American black bears are broad, with narrow muzzles and large jaw hinges. American black bear weight tends to vary according to age, sex, health, and season.

They forage for a variety of foods but are most adept at locating mast crops that have been previously stripped or cut. This species will consume berries, roots, nuts, mushrooms, and all manner of small prey. Small prey such as insects, larvae, and earthworms are gathered by digging in stream banks or swimming. American black bears are also fish predators, and will sometimes catch fish while swimming. This species is migratory and will travel many miles in search of food. Bears at high elevations tend to be heavier than those at lower elevations; they need more food to survive. It is omnivorous in general but will occasionally eat carrion and garbage if the opportunity arises. 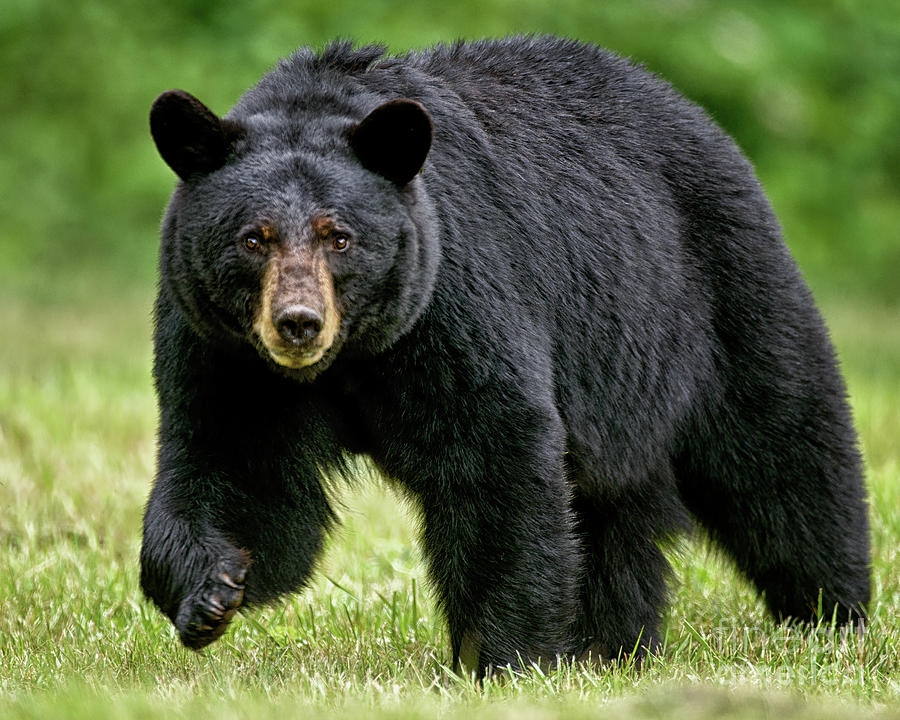 The bottom line, Black bears are omnivores, and their diet depends largely on what is available. They eat fruits, berries, nuts, grasses, insects, small mammals such as mice and squirrels, carrion (dead animals), and occasionally larger mammals. Black bears are also highly attracted to human food sources including garbage (some species have been known to break into houses) and picnic leftovers. The ability of black bears to vary their diet with the circumstances has enabled them to persist not only in a diversity of habitat types but also in highly fragmented forested areas in proximity to humans

American black bears can be distinguished from brown bears by their smaller size, their less concave skull profiles, their shorter claws, and the lack of a shoulder hump. Some individuals may develop a white “crescent moon” blaze on the chest. This white blaze, which is constant in Asian black bears, occurs in only 25% of American black bears.

American black bear numbers have severely declined over the last century and are now listed as threatened in many areas of their historic range. Factors contributing to this decline include loss of habitat due to logging, agriculture, and urban development; overhunting; water pollution; and recreational use such as hunting and fishing.

Black bears are generally not aggressive but may attack if threatened, cornered, or surprised. They are most active during the early morning and late afternoon; they sleep in dens that may be located in trees or under rocks, or in caves. Black bears have a wide variety of vocalizations: chirps, growls, sniffs, whines, and barks; huffing or snorting, panting, grunting, and purring is also common.

Problems that affect individual bears (such as disease, parasites, and malnutrition) are less likely to have a significant impact on bear numbers or distribution because the bears can move freely about in search of new habitats.

Conflicts with humans constitute another potential threat to bears in some areas. In years when natural food supplies are scarce, people may encounter, and frequently kill, large numbers of bears seeking substitute foods such as agricultural crops or garbage. As more people encroach upon bear habitat, and as bear numbers grow, the frequency of interactions between humans and bears likely will increase. Indeed, the number of black bear attacks on humans (including fatalities) seem to be increasing across North
America.