Is Bigfoot Real? For over 400 years, there have been reporting’s of a man like animal that is completely covered in hair, running through the wilderness regions of North America. But is it true? Could something like Bigfoot really exist? Is this just something that people have made up to grab their five minutes of fame? Maybe, but then again, maybe not.

Many Native American tribes have even told the story of this man-like creature. Their stories were of non-human, hairy, tall, man-like creatures. These stories have an intriguing resemblance to the reports that are made today. Is this by chance or is there something more to it?

For those who do not believe in Bigfoot, the stories are nothing more than product of wishful thinking and media influence. Of course, there are those who without second thought purposely fake evidence of a Bigfoot sighting for fun, fame and with the intentions of getting rich. There seems to never be a short supply of those willing to fake evidence and risk their reputation in order to get rich.

Even though there it has been proven that many people have faked Bigfoot evidence, it does not mean that all pictures, video footage and personal accounts are untruthful. It can make it hard to believe such reports when there are so many people out there ruining it for everyone else. This sort of behavior is what makes it hard for some people to fully believe, as they are just fearful that everyone would be pulling their chain with the Bigfoot stories. 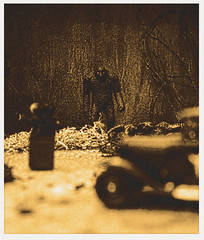 In order to finally put all of this debate to rest, there are many Bigfoot researchers out there. They gather in teams and head out into the wilderness in hopes of gathering undeniable evidence that Bigfoot is real. Most of these people are not driven by fame and fortune but rather by a desire to prove that there is more out there than what we have found to date.

After all, it is not that hard to admit that science is still finding new plants, bugs, reptiles and mammals that they never knew of or thought had long vanished from the face of the earth. And since earth is rather large, it is not that hard to believe that there could be many things out there, hiding in the bushes, that are able to escape our traps. Now add in the factor that Bigfoot could be an intelligent creature, you now have something that has brainpower and all of the room he wants to roam.

With so many people out there determined to prove that Big foot is real, once and for all, it is only a matter of time until some sort of evidence pops up. Maybe it will show that there really is a Bigfoot after all. Then again, maybe it will prove that there is no such thing. Of course, there is also the possibility that no matter how great the evidence is, for either side of the debate, there will always be those who will never believe it. We can only wait and see.

11 thoughts on “Bigfoot Real Or Fake”