Gigantopithecus (in Greek, gigantas meaning “giant” and pithecus meaning “ape”) is an extinct genus of ape that existed from roughly one million years to as recently as three-hundred thousand years ago, in what is now China, India, and Vietnam, placing Gigantopithecus in the same time frame and geographical locality as numerous hominin species. The fossil record suggests that the Gigantopithecus blacki species were the tallest and biggest apes that ever lived, standing up to 3 metres (9.8 ft) and weighing as much as 540 kilograms (1,200 lb).

The earliest Gigantopithecus remains discovered by an anthropologist were found in 1935 by Ralph von Koenigswald in an apothecary shop. Fossilized teeth and bones are often ground into fine powder and used in some branches of Traditional Chinese remedies. Von Koenigswald named the theorized species Gigantopithecus. Ever since then, relatively a small number of fossils of Gigantopithecus have been found. Essentially in a nutshell Gigantopithecus is a monster size version of today’s common gorilla, which is for all intents and purposes how Bigfoot is described by eyewitnesses. 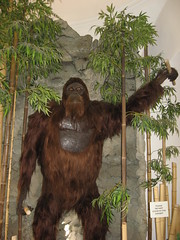 A popular theory used by Bigfoot hunters and researchers alike to provide a valid zoological identity for Bigfoot, the Abominable Snowman, Yeti and Sasquatch creatures is that they are none other than the Gigantopithecus, still alive in relict populations throughout the world.

So the question stands, could a Gigantopithecus or his descendants be the actually source of the Yeti or Bigfoot tales. As stated before Bigfoot investigators along with a couple of maverick scientists claim this theory to be viable. Having said that, most if not all mainstream scientists reject this notion and quite frankly reject the possibility of any Bigfoot type of creature existing nowadays. As usual Bigfoot investigators can come up with all types of theories and possibilities however until a body is found or a Bigfoot is captured dead or alive the questions will remain.

1) If a Bigfoot or Gigantopithecus does exist and is found living in the jungle how did it get there? This is an age-old question and one that remains unanswered until today.

2) Can a Gigantopithecus or a Bigfoot exist in modern day society? These creatures would need to have ample food sources and if so, would they venture out of the wilderness to eat and drink? One could say that the Bigfoot creature may just travel near its food source but then there is a strong chance it could come out of the wilderness for water in remote parts of North America where there may be a human presence.

3) So far, no conclusive evidence has been found to suggest that Gigantopithecus ever existed in North America.

4) If we talk about physical sightings of Bigfoot, is this proof enough that they exist? The answer is no, as anecdotal stories and eyewitness reports do not constitute proof. One thing we can say for certain, Bigfoot researchers do seem to keep coming up with new and innovative evidence pointing to the possibility of these creatures existing. Until conclusive evidence has been found or a body is found one cannot see how mainstream scientists will buy this concept.

5) Is Bigfoot proven to exist? No, there is no real conclusive proof that they are anything but an urban legend. It would be hard to imagine a species so large could be hiding out in the wilderness of North America or Asia for that matter.

6) Why isn’t Bigfoot more popular in North America? This is a very good question with all the popularity Bigfoot investigators seem to generate there should be more interest from the general public, but we must not forget than most Americans do not have an open mind when it comes to such things.