Stories of Bigfoot sightings go back to the Native Americans. The First People had stories of the Skunk man (so called because of the scent that foretold his presence). Early settlers in the west told stories to reporters of encounters with a half human/half ape creature who came upon women and children while they were picking berries.

Teddy Roosevelt told of an encounter with a Bigfoot in his book, The Big Game Hunter in 1893. It was not until 1967 that Robert Patterson shot a brief 16mm film at Bluff Creek, California that a Sasquatch was caught on tape.

However, experts in both human and simian locomotion who have viewed the film agree that neither the gait nor the stride of the female bigfoot creature in the film can be duplicated by a man. So perhaps the “hoax” itself is a hoax.

Subsequently, more pictures have surfaced, as well as other evidence. There are fifty or more recordings of alleged Sasquatch from Kentucky alone. In 2007 there was a three minute video shot from an airplane of a Bigfoot walking across a field in east Tennessee. 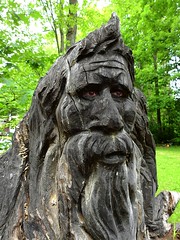 Mike Greene, a former fraud investigator from New Jersey has recently shot the first definitive thermal imaging footage in the Uwharrie National Forest outside of Asheboro, North Carolina. Unlike night vision film, thermal imagery will show if the figure in the footage is a man wearing a Bigfoot suit, by the placement of heat sources. Greene left a candy bar on a stump for bait, and then set up his thermal image camera trap. Sure enough, the creature heeded the call of chocolate and scooped it up. It was obviously not a bear, nor was it a man.

Hair samples have been sent to labs for testing. Some of them have proven to be other animals, such as bears, elk and in one case Irish Setter. One fraudster tried sending in a handful of acetate used to make stuffed animals. However, several samples that have been analyzed either came back as unable to identify or were conveniently damaged too much to do a proper test.

Veteran Bigfoot investigator David Raygoza of the Sanger Paranormal Society has exhibited a photograph taken with a trail camera (a “game trap”) in June 2009 in the Sierra range in California. The picture is a little fuzzy. But it is obviously not a bear or a tree stump, nor is it a man. The camera was set up when there was a report of a Bigfoot family being seen.

The question remains, how can a creature as large a Bigfoot remain unseen. There are millions of unpopulated acres in this country. There are animals every day who were thought to be extinct that suddenly appear, and prove they weren’t extinct at all, only hiding. The black bear and bobcat lives very quietly in the national parks of the eastern US. They do not interact with people voluntarily. People live their entire lives next to national parks and never see a bear or a wolf.